Rule of Law: We must guard against government overreach 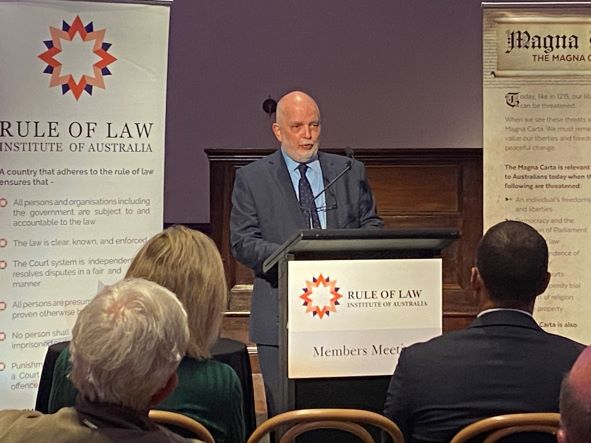 Societies are defined by how they respond to challenges. And right now, the pervasive challenge confronting this generation is government overreach.

This term is sometimes used as shorthand for a political debate about the merits of small government. That argument has its place – but not here.

What I am referring to goes beyond politics and should concern all democrats, regardless of where they see themselves on the political spectrum.

While the power of the federal government is defined and limited by the Constitution, the rule of law extends further and provides benchmarks for all governments. Overreach takes place when those boundaries and benchmarks are ignored.

This is best understood by considering the response to three issues: the pandemic, national security and the erosion of liberty under the pretext of fighting corruption.

We have no choice but to deal with these issues. But we do have a choice about how we do so.

It comes down to this: will we insist that even in turbulent times, this country will adhere to democratic and legal norms?

Are we prepared, in other words, to keep our heads when all around us others have lost their bearings?

Are we prepared to resist mob rule and insist that public policy includes the checks on power that are fundamental not just to good governance but life in a civilised society?

The rule of law is sometimes misunderstood as being a mechanism by which rulers control the ruled. That might be so in China.

But here it is the reverse: it is a collection of principles that function as a bulwark against tyranny – they restrain state power, prevent arbitrary rule and by doing so, they protect freedom.

This doctrine includes the presumption of innocence, equal treatment before the law, the right to a fair trial and the rule against retrospective penalties.

It is clear that these ideas no longer command universal respect. Democrats need to turn that around.

No matter how beneficial government action is intended to be, it will contain the potential for overreach unless it is accompanied by effective oversight and checks on the exercise of power.

During the pandemic, some state governments even restricted parliamentary review of executive action, only to face justified demands for the restoration of this most fundamental element of democracy.

Responsible government, which is the primary check on overreach, means premiers, ministers, chief health officers and all their agencies are responsible to parliament for their conduct.

Yet responsible government can also be illusory – as it was for a time in Victoria until community sentiment forced a change. During the height of the pandemic states closed their borders with little regard for the plain words of the Constitution’s guarantee – now rendered meaningless – that trade, commerce and intercourse between the states shall be absolutely free.

Victoria even used retrospective legislation to strand Victorians interstate with little understanding that this infringed the rule of law by retrospectively imposing a detriment.

Yet in one regard, the pandemic has been beneficial: it has triggered an awakening about the need to check government power.

After federation we became a nation and put aside colonial curiosities like the Queensland navy. Yet as the pandemic took hold, and the federal government shied away from its constitutional responsibility for quarantine, states started conducting themselves as if federation never happened.

Victorians, locked in their homes for months, learned that the guarantee of freedom of movement in their Charter of Rights is even more useless than that of the Constitution.

The charter’s guarantee applies only to those “lawfully within Victoria” – which implies, wrongly, that this state can banish people.

The High Court made it clear last week that banishment – or stripping a suspected terrorist of Australian citizenship – was within the powers of the federal government. But it needed to be done properly – without bestowing judicial power on politicians.

That is why the court restored the citizenship of terror suspect Delil Alexander.

It was up to courts, not politicians, to determine the facts.

That may have cleared the way for others to have their citizenship restored. Yet who is to blame?

Is it the High Court because it defended the separation of powers? Or is it the previous government because it breached this boundary?

If there is to be a national integrity commission, Labor has made it clear it will be based on seven design principles. When you read them, they look like a description of the NSW Independent Commission Against Corruption.

That suggests the new government is not yet sufficiently aware of ICAC’s problems.

Those design principles indicate that the courts will be expected to provide a fair trial for people after the new commission has publicly ruled against them.

To see why this is objectionable, imagine a world in which governments urge police to make “findings” that suspects are guilty before they go to trial.

Empowering the new commission to make public findings will inevitably give rise to conflicting decisions.

Some people will be declared corrupt only to be acquitted in court – which means there will be no finality.

The new commission should be judged against the requirements of the rule of law.

This article is based on an address on Wednesday to members of the Rule of Law Institute, where Chris Merritt is vice-president.