When the latest version of the national schools curriculum was unveiled last week, it was soon apparent that while some shortcomings had been addressed, the education bureaucracy had still managed to slip in some weird ideas.

Why, for example, are children in years 9 and 10 being asked to develop their “eco-identity”? And why is “sustainability” a cross-curriculum priority while civics is not?

Initial assessments were mixed: on one view, it looks like the civics and citizenship syllabus now puts more focus on teaching the origins of Australian democracy and its Christian and Western heritage.

But on another view the national curriculum is “a political document infused with a pagan-green ideology” that means “children are being taught it is better to be an indigenous Australian than any other type of Australian”.

That is the view of Bella d’Abrera, director of the foundations of Western civilisation program at the Institute of Public Affairs. If she is right, we are in a great deal of trouble.

In theory, the new approach to civics should start making an impact across the nation next year. The test will be whether more school leavers emerge with an understanding of the core features of our system of government and their responsibilities as citizens.

Unless the schools get this right, the long-term damage to society could be immense.

The world’s democracies are under challenge and if school leavers do not understand their own system of government, how can they be expected to face down authoritarians?

Even domestically, some would readily abridge the doctrine of responsible government by requiring the federal government to be accountable not only to parliament, but to a commission of public servants with law degrees.

Unless school leavers understand concepts like the separation of powers, and the difference between arbitrary rule and legitimate lawmaking, the door will be open for those who would infringe our liberties.

The great benefit of properly made laws was identified in 1690 by English philosopher John Locke: “Wherever the law ends, tyranny begins.” American revolutionary Tom Paine made much the same point in 1776: “In America the law is king.”

And so it is in this country. But here’s the problem. Even if the national curriculum has entrenched that kind of thinking in the teaching of civics, NSW is already off with the pixies.

In the nation’s most populous state, the current national curriculum has been applied in a manner that forms a sharp contrast with the way things are done in the rest of the country.

This state has adopted an approach to teaching civics that is so limited that it verges on the dangerous. This has reduced the likelihood that school leavers will absorb the one idea that will protect them from tyranny: everyone in this country is subject to the law, even the most powerful.

The deficiencies in the NSW approach have been outlined in a new report by the Rule of Law Education Centre – which is part of the same organisation as the Rule of Law Institute.

Even though there were problems with the old national curriculum, its approach to civics and citizenship was still better than the current approach in NSW.

Under the old syllabus, the national curriculum meant civics and citizenship was offered as a discrete subject strand in the humanities and social sciences key learning area, which allowed for explicit teaching of this strand from years three to 10.

But in NSW the report found there is no mandatory, comprehensive, discrete or explicit aspect of civics and citizenship in the state’s curriculum.

The report, known as “The state of civics and citizenship education in NSW”, compares that state’s approach with the requirements of the last version of the national curriculum. It is being launched on Friday and is available on the website of the Rule of Law Education Centre. 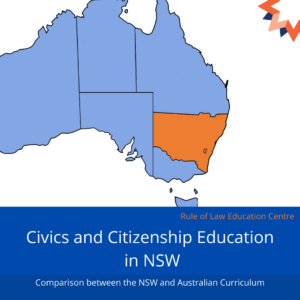 After outlining the gap in the state’s approach it calls for urgent reform to either include civics and citizenship as a cross-curriculum priority, a discrete subject strand or a compulsory subject.

“It is possible for students to experience no, or very limited, exposure to civics and citizenship ideas in an historical or contemporary Australian context throughout their entire NSW schooling,” the report says.

“In NSW, civics and citizenship is not offered as a stand-alone subject nor a discrete subject strand. Rather, it is woven through the content across various subjects offered in the key learning area of human society and its environment. The NSW curriculum does not classify civics and citizenship as a ‘cross-curriculum priority’ but rather as an ‘important learning area’.”

Those “cross-curriculum priorities” are limited to Aboriginal and Torres Strait Islander histories and cultures, Asia and Australia’s engagement with Asia, and sustainability.

Civics and citizenship is relegated to the second last place in the list of “general capabilities” and receives “little attention or elaboration”.

It’s difficult to avoid the conclusion that the distortion in the current NSW curriculum is similar to that in the new national curriculum that has been identified by Bella d’Abrera. They both give cross-curriculum priority to sustainability and Aboriginal and Torres Strait Islander histories and cultures. Neither elevates civics to that category.

There are elements of civics and citizenship in the NSW curriculum. But the report says there are few opportunities for teaching and learning the basic foundations of government and democracy, law and citizenship.

Even where the NSW curriculum does cover civics and citizenship, it is not compulsory. It is merely part of other subjects where, according to the report, it lacks identity, consistency and ­effectiveness.