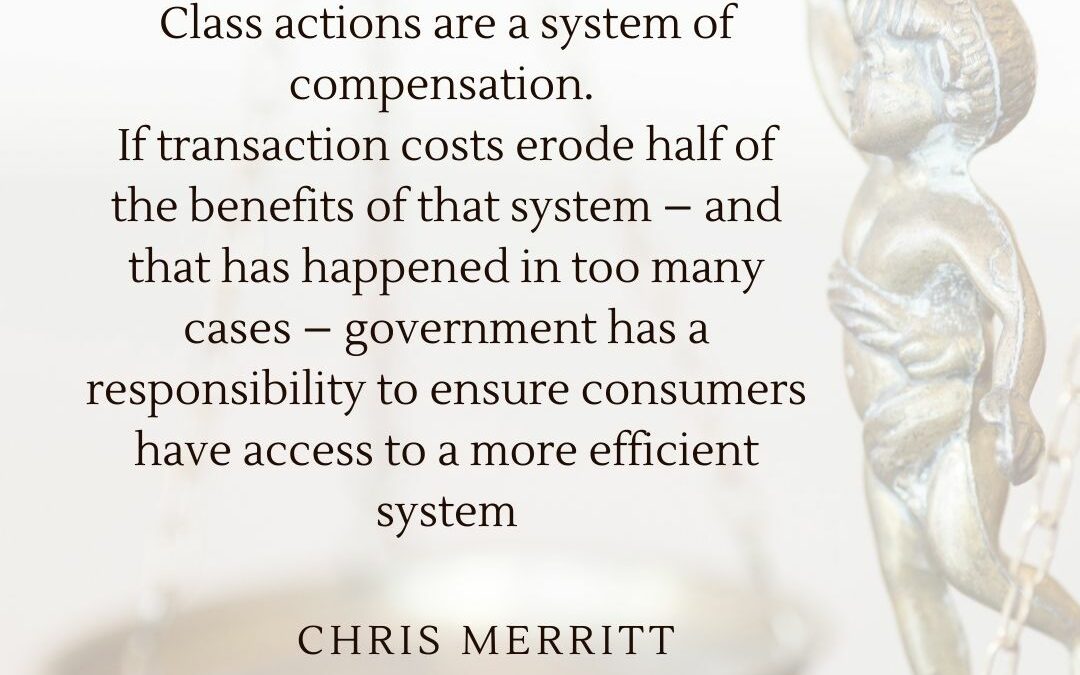 Some mistakenly assume the rule of law is a method by which rulers subdue the ruled. It is actually the reverse. It consists of principles that enable free societies like ours to protect themselves against the arbitrary exercise of power.

It gives effect to an idea that goes to the heart of what this country is all about: a fair go. And fairness helps explain why the Institute supports the core of what the proposed Bill seeks to achieve.

The Important Role of Class Actions

Previous inquiries have made it clear that without change the class action system in this country is increasingly being questioned.  This system, as originally conceived, was a valuable addition to the legal system. It was intended to be an efficient method of compensating large numbers of people who have suffered similar loss or damage at the hands of a wrongdoer.

But no system of compensation can survive for long if it costs more to run than it delivers in benefits.  The material before this committee indicates that some class actions are approaching that point.

Who really benefits from Class Actions?

The Rule of Law Institute supports class actions – as originally conceived – and it also accepts that litigation funders, when appropriately regulated, can level the playing field and ensure a fair fight against well-resourced opponents.

We also accept that lawyers and litigation funders should be properly compensated for their services. But there should be no doubt that the class action system exists to benefit consumers, not lawyers, funders and other service providers.

Proposal that 70% of Settlements should go to Clients

The proposed rebuttable presumption that 70 per cent of settlements should go to clients will achieve that. And while that appears to be an arbitrary figure, it seems to be a value judgement of a kind that can legitimately be made by parliament.

It is completely understandable that litigation funders and class action law firms are concerned about being generally restricted to taking no more 30 per cent of their clients’ settlements. But this needs to be seen in context.

The current arrangements have given rise to a series of settlements in which the interests of clients, when judged by the share of settlements, have received insufficient weight.

At the end of the day, how much do Litigation Funding Participants Receive?

Here are a few examples that were assembled by the Law Council and presented to this committee last year:

But the worst example is outlined in several submissions to the current inquiry.

That was the 2015 settlement in a class action on behalf of 336 former employees of Huon Corporation.  Once lawyers, funders and other service providers were paid, the former employees received nothing from the $5.1 million settlement.

Lawyers and funders provide worthwhile services that, in many cases, make it possible for wrongs to be redressed that would otherwise have been beyond the reach of the justice system.

Is there Justice if the predominate proportion of a settlement goes to the lawyers and funders?

Access to justice can be illusory if a predominant proportion of a settlement is diverted to others.

The Huon Corporation case shows that there must be a point at which there is simply no justification for pursuing a claim when there is little prospect of a remedy for consumers. That case shows that some wrongs cannot be remedied by litigation and to pursue them simply makes work for lawyers and funders at the expense of consumers.

The case for pursuing the other cases I mentioned – where consumers received a minority share of the settlements – was also weak when judged by the intended purpose of class actions.

It seems clear that the introduction of the 70-30 split as a rebuttable presumption will have the effect of weeding out those cases that would not be viable when judged on a cost-benefit analysis.

There might be a solid legal case. But when judged on a cost-benefit basis, it is clear that some class actions have poorly served the interests of clients. A different form of compensation is required.

The fact that economically unviable matters will no longer proceed does not undermine the legitimacy of the Bill. Class actions are not a universal remedy for all wrongs. But by limiting them to economically viable cases, the challenge for government and law firms is to provide an alternative, less costly method of resolving disputes.

It has been argued that the current system is preferable because it is better for consumers to receive 50 per cent of something instead of 100 per cent of nothing.

That argument, however, misses the point that class actions are a system of compensation. And if transaction costs erode half of the benefits of that system – and that has happened in too many cases – government has a responsibility to ensure consumers have access to a more efficient system. That, after all, is what class actions were intended to be.

What about the difficulties in determining the distributions of settlements?

There has been some discussion today about the fraudulent conduct in the Banksia Securities class action. The point about that case is that the fraud came to light after a contradictor was appointed to help inform the Victorian Supreme Court.

That provides a compelling argument in favour of the Bill’s proposal to require funders to pay for independent fee assessors and contradictors to report on the reasonableness and fairness of the distribution of settlements.

I draw the committee’s attention to the assessment of solicitor Stuart Clark, a former president of the Law Council, whose submission to this inquiry questions the capacity of judges to make a fully informed decision when called upon to oversee the reasonableness and fairness of settlement distributions.

Mr Clark believes that when judges make these decisions, they do not have the training, experience or, in most cases, sufficient information to properly assess the return to funders let alone the fairness of that return.

Support of the Bill by the Rule of Law Institute

The Rule of Law Institute agrees with the overall goal of the Bill in providing greater certainty to consumers of legal services during funded class actions.

That said, some doubts have been expressed about the constitutionality of aspects of the Bill, particularly in the opinion by former Solicitor-General Justin Gleeson SC and others that was commissioned by the Association of Litigation Funders.

The Rule of Law Institute urges the committee consider Mr Gleeson’s opinion. We are also concerned about another aspect of the Bill that might need to be clarified.

One of the leading funders, Omni Bridgeway, has expressed concern about the risk of satellite litigation to clarify whether contingency fees charged by lawyers in Victoria are covered by the Bill now being considered.

The Rule of Law Institute agrees with Omni Bridgeway’s assessment that litigation funding and law firm funding through contingency fees are sufficiently similar and should be subject to one consistent set of rules and regulations.

The government has previously made it clear that it wants talks aimed at achieving nationally consistent rules. It seems logical for all doubt to be removed about whether contingency fees in Victoria are indeed covered by this bill.

The Bill is clearly a consumer protection measure and it would seem odd if its protections were somehow truncated for consumers in Victoria.