The Victorian Bar Association and leading Victorian QC’s have heavily criticised the Public Health and Wellbeing (Pandemic Management) Bill for conferring on the Minister of Health unlimited and practically unrestrained power to rule Victoria without the usual checks and balances. 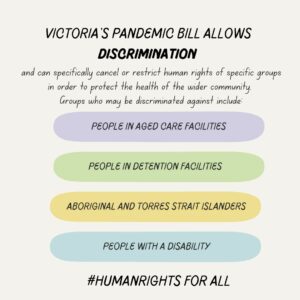 The QC’s draw attention to the Bill expressly authorising the Minister to make orders varying the approach to persons or classes of persons identified by reference to an attribute within the meaning of the Equal Opportunity Act 2010.    According to Health Direct, a government funded service provider, those at most risk of getting the virus are those in aged card facilities, people in detention facilities, Aboriginal and Torres Strait Islander people and people with a disability. The Bill will enable the Minister to discriminate against any of these vulnerable groups, singling them out in a Pandemic Order, in order to reasonably protect public health.

This means somebody with a suppressed immune systems, such as HIV AIDS, indigenous communities or those in prison could be discriminated against in order to protect the health of the wider community.

For these vulnerable groups, the Minister could specifically cancel or restrict most human rights in Victoria including;

The Commissioner had prior to the introduction of the Bill already expressed its concern on limiting human rights during Covid-19 and has stated that the checks and balances that ordinarily exist are important to our democracy.  Without appropriate transparency and oversight it noted there is a real risk of Australians, particularly those in vulnerable groups becoming exposed to unnecessary restrictions on their rights and freedoms.

We consider the Bill possess a substantial and serious risk of Australian being discriminated against and exposed to unnecessary interference on their rights and freedoms, and calls for the Commission to announce that it will publicly review and report on the Bill.

Rule of Law Institute of Australia